On 8th July 1997, the flood wave reached Lower Silesia. On that day, the water flooded the area of Kłodzko and burst into Wroclaw only a few days later. Before that happened, heavy rains had swept through Poland from 4th July. In Wałbrzych, Opole, Jelenia Góra and Katowice provinces, the water level in rivers exceeded alarm thresholds. Particularly difficult was the situation in the Opole province, where a flood alert was announced already on 6th July.

On the night of 7th July, things became so dangerous that the media began to inform about the first casualties of the deluge. The water sank all local villages located near Kłodzko and then burst into the city. The alert thresholds were exceeded in Poland’s two largest rivers: the Vistula and the Oder. The situation became more difficult every year; to make matters worse, it became clear that services had not been prepared for the flood, so all undertaken actions were insufficient. 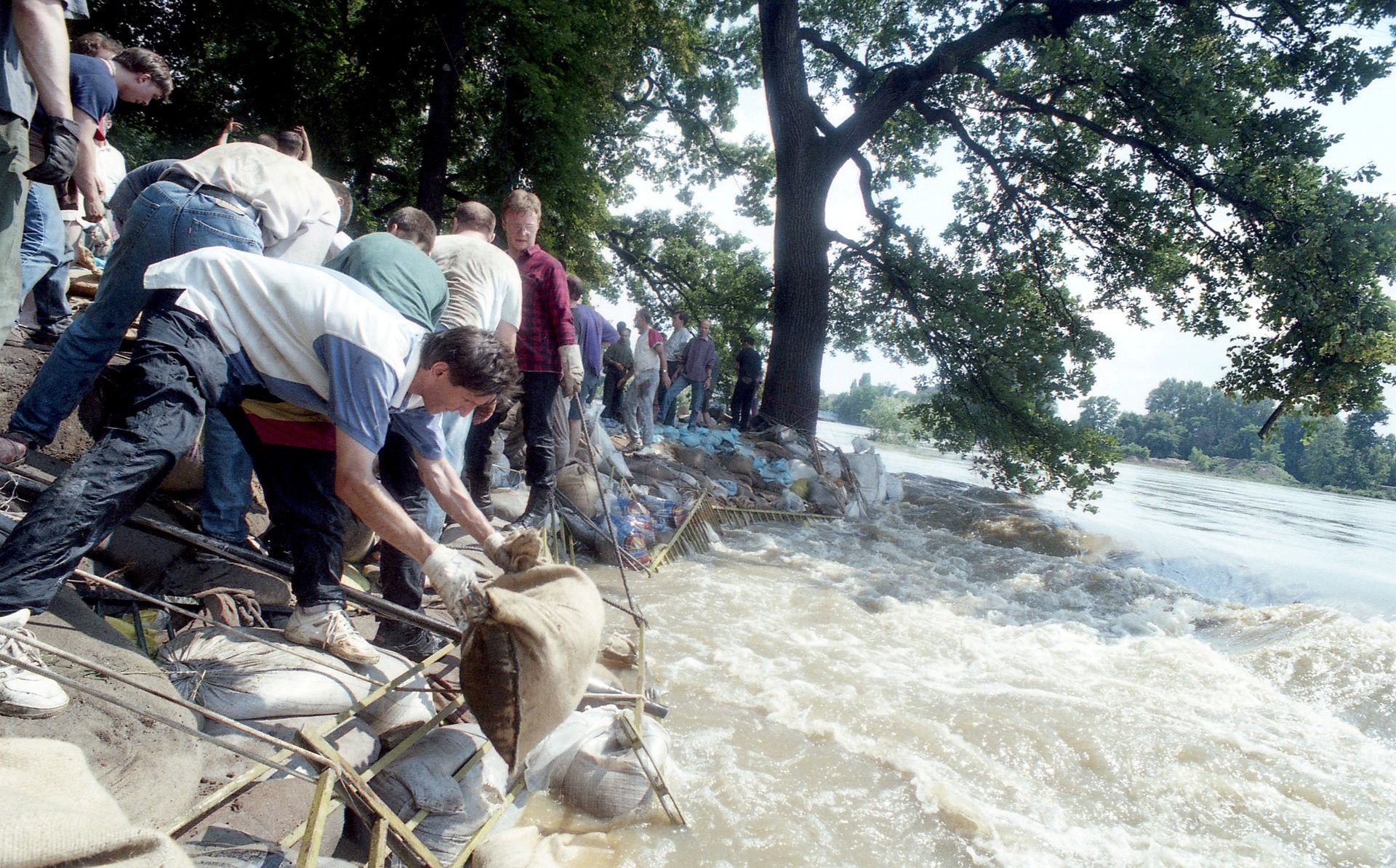 Another day brought even greater losses. The flood inundated Bardo – a small historic town situated on the Nysa Kłodzka river. The flood wave destroyed the bridge connecting the town with Kłodzko, and further cities and villages were flooded. The water inundated also the most part of Kłodzko; the situation became increasingly dramatic every hour, and people tried to save their belongings. In the Kłodzko Valley, the water level rose so much that the inhabitants had to be evacuated. 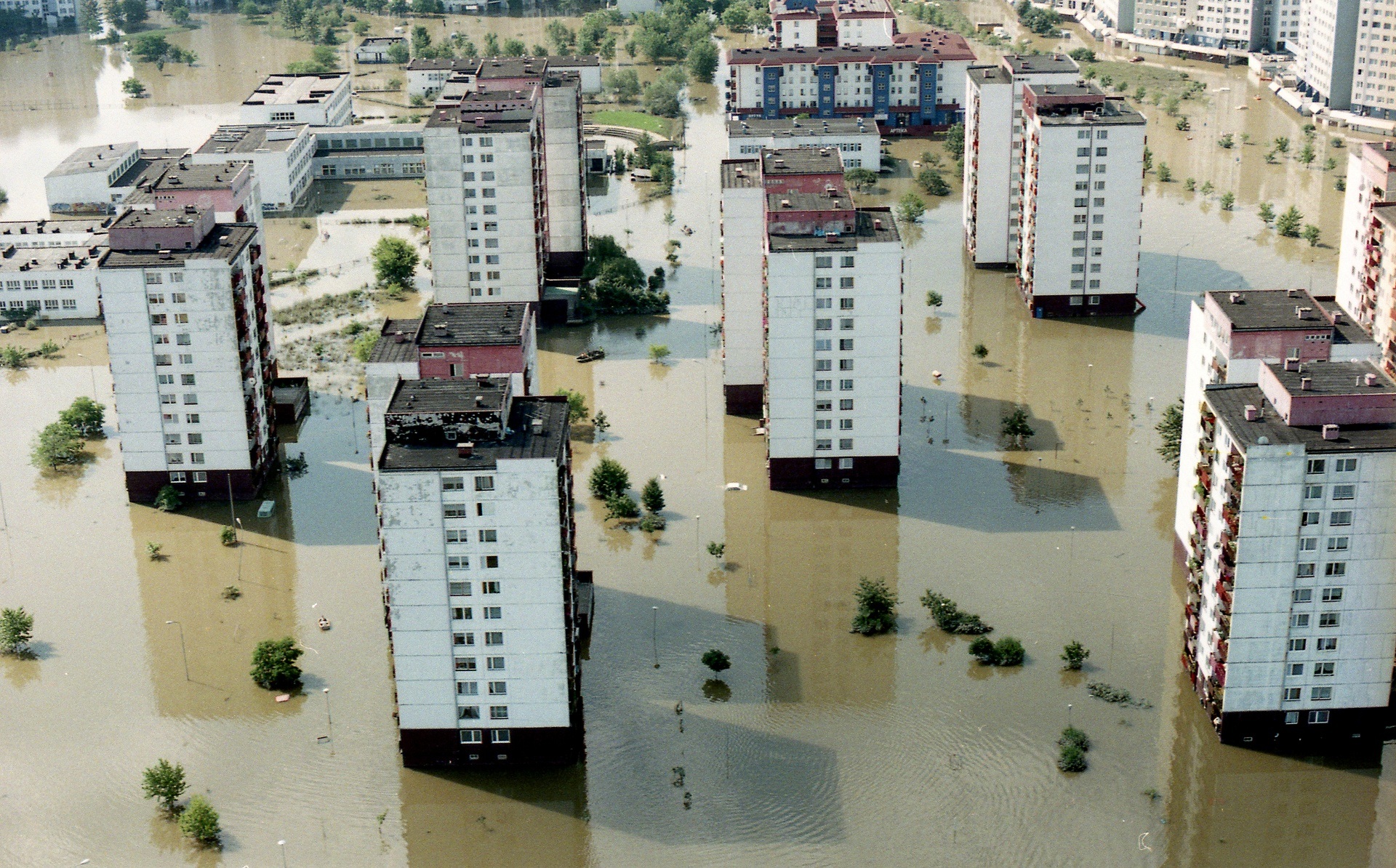 A rapid increase of the water level on the Oder in Trestno near Wroclaw sparked concern throughout the region. Many places began to suffer from a shortage of food and equipment, and some flooded villages were cut off from the transport system.

On Wednesday morning, the water inundated Kędzierzyn Koźle and then burst into Opole. The highest flood alert was announced in Wroclaw, and shifts of flood squads were held.

The motorway connecting Opole with Wroclaw was flooded. The situation became increasingly dramatic every hour. Opole was inundated, and Wroclaw was preparing for the fight against the flood. Food disappeared from shop shelves with lightning speed; the city inhabitants bought up mineral water, candles, torches and batteries. In order to protect the city against the consequences of the flood, the Provincial Flood Protection Committee decided to blow up flood embankments in villages near Wroclaw: Janowice, Jeszkowice, Łany. The inhabitants of these villages had no influence on the decision of the authorities – moreover, they learnt about it from the press. 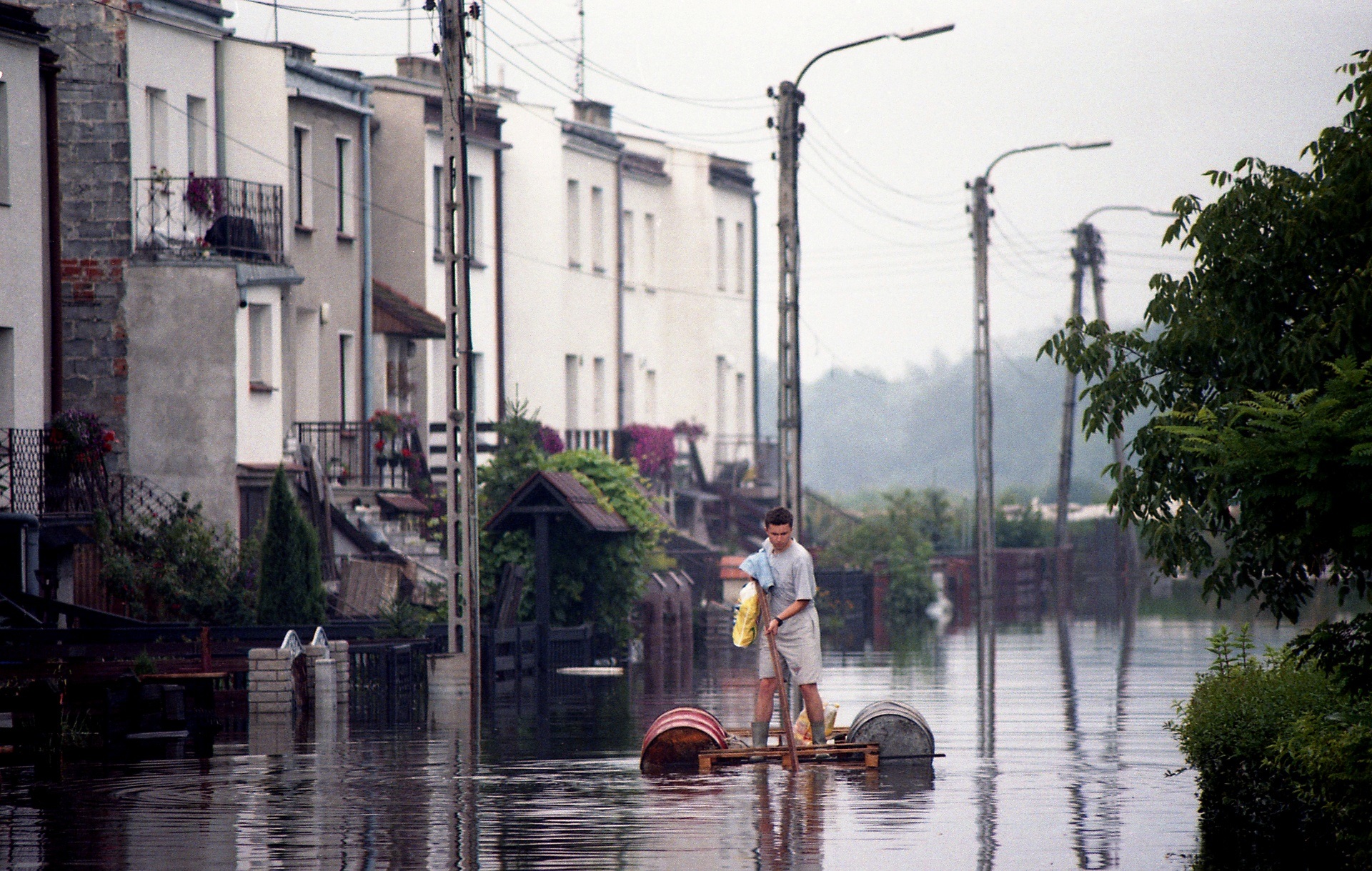 Consequently, they held a protest against the blowing-up of the embankments. Particularly endangered were the areas of Biskupin, Sępolno, Zalesie and the north-eastern part of Wroclaw. Panic broke out in the city, and the inhabitants tried to save their belongings.

Inhabitants of Łany, a village near Wroclaw, protested against the blowing-up of flood embankments. The resistance proved effective and, in spite of the police’s and the army’s efforts, the local population managed to protect the village from inundation. This brought serious consequences for the capital of Lower Silesia.

The Kozanów housing estate got under the water, then Opatowice was inundated, and the water-bearing areas of Wroclaw were flooded in the evening. A dramatic struggle started so as to prevent the breaking of embankments on Ostrów Tumski and in the area of Old Town.

On the night of Friday to Saturday, Opatowice and then the Wroclaw waste-water treatment plant were flooded. The road connecting Oława with Wroclaw was broken. The situation became increasingly difficult every hour. The entire southern Wroclaw was cut off from power supply, and the embankment located near the Osobowicki Bridge was broken in the morning hours. In the Kozanów housing estate, the water reached the level of a few metres.

Within a few further hours, the water level became so high that the block located at Gwareckiej street was inundated. In order to prevent bigger losses, a decision was made to close Warszawski, Pomorski, Osobowicki, Trzebnicki, Piaskowy and Pokoju bridges.

After 3:00 p.m., a part of the city was completely cut off from the world. The water inundated the Tadeusz Marciniak Hospital, the Institute of Biochemistry at Tamka, the Emergency Medical Service and the Water Production Plant at Grobla. Wroclaw was deprived of drinking water, and the emergency phone number 999 did not work.

In the evening, around 7:00 p.m., the water burst onto Plac Wróblewskiego and then flooded the psychiatric hospital located at ul. Kraszewskiego. The flood wave reached also the area of the Main Railway Station, Kościuszki and Małachowskiego streets. One of the main streets of Wroclaw – Świdnicka – was inundated.

Though it may be hard to believe, a quarter of a century has just passed since the famous flood that affected Poland in July 1997. However, even after so many years, the events still arouse strong emotions and bring back the memories of inhabitants of Lower Silesia.

The direct cause of the flood that affected Poland in 1997 was the interaction of two air masses that led to abundant rainfall. The inflow of cold air masses from Western Europe contributed to the formation of a low-pressure system over northern Italy, which moved towards the south-east, where it came across the hot air from the Mediterranean Sea and the Black Sea.

The first wave of intense rainfall came on 4th July and lasted till 8th July 1997. Most rain fell in the territory between Brno, Katowice and Wroclaw. On these days, the heaviest rainfall (-455 mm) was recorded in Praděd. However, it was not the last rainfall wave that swept through Poland at that time. Two weeks later, on 18th–22nd July, abundant rains occurred in that territory; consequently, total rainfall in July was even five times higher in some areas.

What were the consequences of the flood in Wroclaw?

The rains in July 1997 were so heavy that the retention reservoirs, rivers and soil could not absorb such a huge quantity of water. This resulted in a flood that, because of its scale of destruction, is called the flood in Wroclaw.

Apart from Poland, it hit also  Germany, Slovakia, Czech Republic and Austria. The Polish cities that suffered the heaviest losses included Wroclaw, Kędzierzyn-Koźle, Racibórz, Nysa and Kłodzko. Altogether, 25 provinces were flooded, and almost 700,000 hectares and 1,362 cities and villages got under the water. 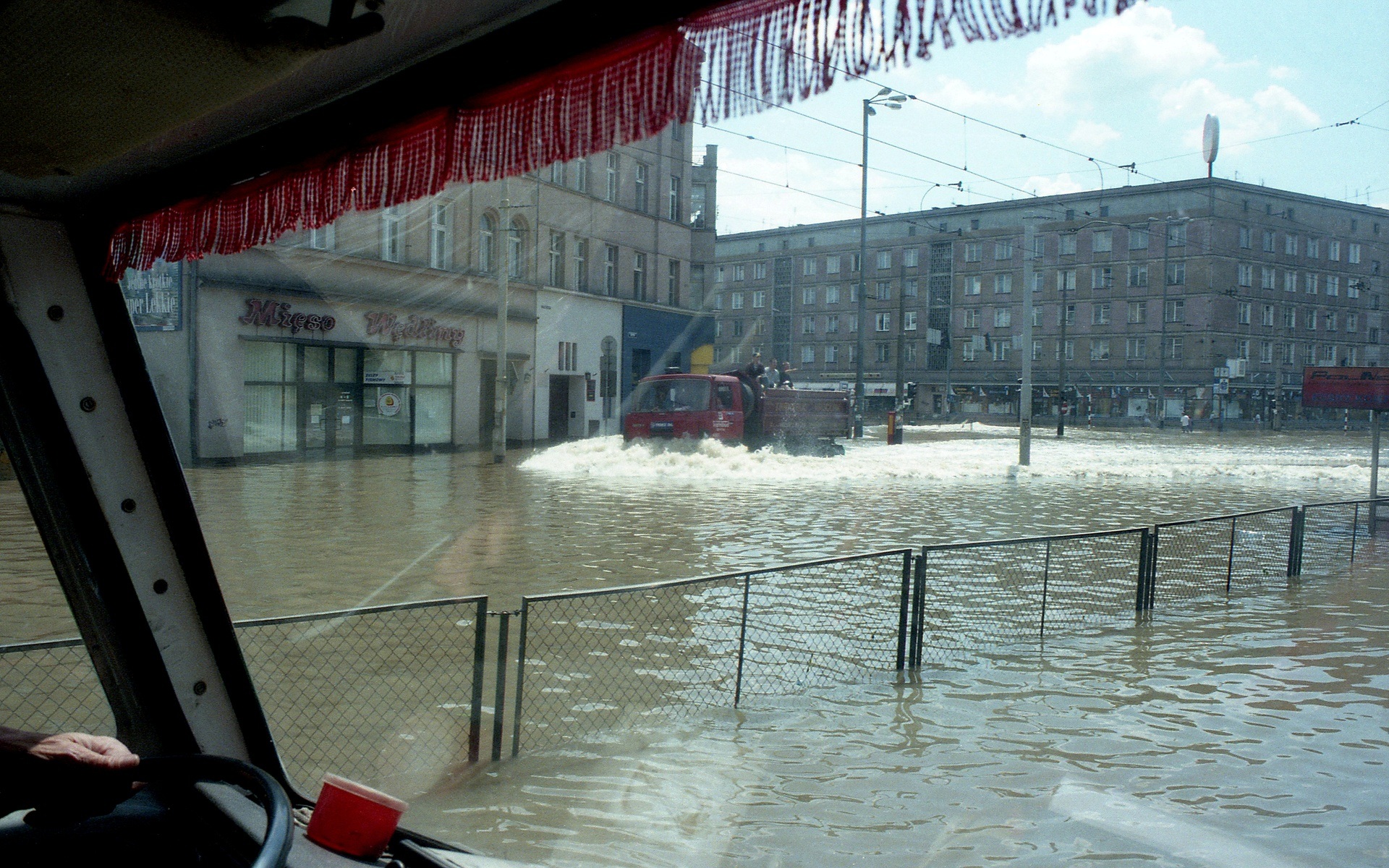 Almost 20,000 persons had to evacuate, leaving all their belongings behind. The flood endangered also the safety of animals kept in the Wroclaw Zoo. According to information from Hanna Gucwińska – the director of the zoo, the situation became more difficult every hour. The safety of animals was watched over by firefighters, policemen and Wroclaw inhabitants, who provided active and continuous support during the flood.

In spite of huge commitment of rescue services and help flowing from every part of Poland, the flood brought immense losses. Around 7,000 persons became homeless, and almost 700,000 apartments, over 800 schools, 4,000 bridges and over 600 km of flood embankments were damaged. Moreover, around 9,000 companies suffered material losses as a result of the flood.

How many people died during the flood of 1997?

The famous flood that affected a number of European countries in the summer of 1997 claimed the lives of 56 persons in Poland alone. It is estimated that around 7,000 persons lost their homes and around 40,000 lost their belongings. The total nationwide losses reached 12 billion PLN. On a European scale, losses were much bigger. Altogether, the flood of the millennium claimed the lives of 124 persons.

Wroclaw 1997 flood: the story of the song ‘Moja i Twoja nadzieja’

The song ‘Moja i Twoja nadzieja’ [‘My and Your Hope>>'<<] of the Polish rock band Hey became a hymn of the unity and tragedy of people who lost their loved ones or their belongings in the flood of 1997. Interestingly, the song had come into being a few years earlier for completely different reasons.

The song with lyrics written by Katarzyna Nosowska (with help from Edyta Bartosiewicz) in 1992 featured on Hey’s debut album Fire in 1993. The composer of the song was the band’s original leader Piotr Banach – he was initially set to write the lyrics, too, but Nosowska’s version was eventually chosen for the album.

In 1997, ‘Moja i Twoja nadzieja’ resounded during the flood of the millennium. The words: ‘Nothing, really nothing can help if you don’t help love today’ gained a new sense. In the face of the tragedy that affected Poland during the flood of 1997, the song was to reassure and cheer up the flood victims. But, in order for the song to play not only a symbolic role, a decision was made to put its old and new version on a charity single the income from which would be donated to the flood victims.

Piotr Banach and the rest of the band waived their rights to royalties, so the entire income was donated to the victims. Apart from Hey, a number of other Polish artists took part in the recording: Maryla Rodowicz, Edyta Bartosiewicz, Natalia Kukulska, Renata Dąbrowska, Ania Świątczak, Patrycja Kosiarkiewicz, Joanna Prykowska, Czesław Niemen and Grzegorz Markowski.

The flood that affected Lower Silesia in 1997 became the subject of Netflix’s new series High Water, the premiere of which is scheduled for July this year. The directors of the series are Jan Holoubek and Bartłomiej Ignaciuk, and the script was written by Kinga Krzemińska and Kasper Bajon. The series consists of 6 episodes and tells the story of the flood that affected the Wroclaw region and the life of the local community.

The series about the flood of the millennium was made on a special occasion: this year marks the 25th anniversary of these tragic events. It is worth mentioning that this subject was brought up also in another Polish production. Rojst ’97, directed by Jan Holoubek, was set in a similar time frame.